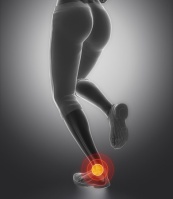 If you don’t know where your Achilles tendon is, then count yourself lucky as if you have had a problem with it you would know ALL about it.  I find Achilles tendonopathies to be quite common place, but rarely is it the original reason people come to see me.  They come with other issues and in discussing their case history it will come up that they have this long standing niggling Achilles problem.  In some cases they ‘just get on with it’ in other cases they have given up the sports that make it worse e.g. squash or running.  I wonder why people are so keen to give up on this condition?  Or is it that they have tried many different treatments with limited result?  This got me curious.

Looking at the research there seems to be one defining key to success with treating this condition.  The eccentric load of the Achilles tendon. Think controlled heel drops rather than toe push ups, eccentric is all about the lengthening phase.  It was first proved effective by Alfredson in 1998.  In a prospective study of 15 athletes with chronic Achilles tendinosis, three sets of 15 repetitions of bent knee and straight knee calf raises were performed, twice a day, seven days per week over 12 weeks. Athletes were told to work through pain, only ceasing exercise if pain became disabling. Training load was increased in 5 kg increments with use of a backpack that allowed for the addition of the weight once training with bodyweight was pain free. All fifteen athletes returned to pre-injury levels of activity. Additionally, they had a significant decrease in pain with a significant increase in strength. Result!

Since then many studies have been done along this line of rehabilitation and it appears the ‘Why?’ this works is not yet clear, but what is clear is that it does work.  Alfredson, went on to do another study in 2004 which showed that along with reducing pain and increasing strength eccentric loading even reduced the thickening on the Achilles tendon in question.  Interestingly , where some level of pain remained at an average of 3.8 years later the thickening remained.

So where does that leave us as soft issue therapists?  There is lots of anecdotal evidence that massage, friction, active release techniques and instrument assisted massage have been used as part of an integrated rehabilitation approach in cases where Achilles tendon problems have been resolved but no concrete evidence that these techniques themselves solved the problem.    Is this maybe why so many people have given up on their Achilles?  Too much hands on treatment and not enough homecare perhaps?

So what do we do?  My point of view here is that they key to solving your Achilles problem is to first identify exactly what the problem is.  If indeed your Achilles tendon is causing the issue then the most important part of the process is in the rehabilitation exercises that you yourself perform each day.  There is no ‘easy cure’,  it needs your commitment and hard work.  Secondly, I believe soft tissue therapy can aid the process.  If not in changing the pathology of the Achilles itself, in addressing any compensation patterns that start to emerge e.g. one client I had took to running on her tippy toes – talk about calves of steel!   Who wants to add a calf strain to an already painful Achilles problem?

Get assessed, get diagnosed, get good advice and get better.  Don’t just give up!

This site uses Akismet to reduce spam. Learn how your comment data is processed.