Power Tennis, the ‘Grunt’ and your Core 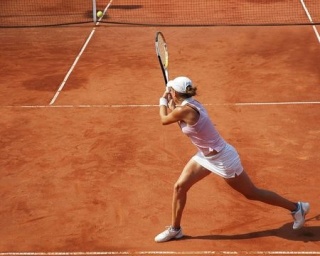 After a thrilling day at Wimbledon on Friday, my own little tennis ‘victory’ and some pretty tender ribs for the last week, I have been inspired to think about why my ribs hurt, why we ‘Grunt’ under pressure and how we can get more power in our tennis shots.

I myself can be guilty of the ‘Grunt’.  It comes at two stages for me.  Firstly when I am completely overstretched for a shot, the ‘Grunt’  makes an appearance – the result of me digging deep to get the power to return the ball with at least some pace when in this weak, lengthened position.  Secondly, it seems to appear on even the tamest of shots when I am in the third set and feeling weary.  So it’s clear that for me at least the ‘Grunt’  helps me to find power where there is none.  So why do so many women tennis professionals grunt on almost every shot?   Am I missing a trick?

The biomechanics of tennis are quite complex given the range of shots, spins and slices you can produce but what is common to almost every shot is the creation of power by rotating the upper body across the lower body.  Even the serve involves this rotation from one side to the other but with additional hip flexion and side bend. The ability to both generate and release power in this plane is the key to unlocking most of the power and control in your shots.  In order to do this we need both flexibility to help with the coiling or loading followed by power to be able to release this energy on contact with the ball.  So where does the ‘Grunt’ come into this?

Let’s rewind to this rotation, flexion and bending of the torso – working the ‘Core’.  Given the speed of tennis, compared to say golf, (which involves a lot of the same muscles but I am yet to hear a professional ‘Grunt’) the player needs to be able to move into position, prepare for the shot and then hit the shot in very quick succession.  In order to do this they need to contract their core quickly but forcefully to control the upper and lower body while releasing power.  This can be done by having an extremely strong and flexible core but it seems that as the demand for women’s tennis to increase in pace and power it has given birth to the ‘Grunt’ – an EXTREME forced exhalation to help achieve this.  This forced exhalation calls for a loaded contraction of the Internal and External Obliques, the Transverse Abdominus, Rectus Abdominus and the Quadratus Lumborum.  Muscles usually not active in quiet exhalation but a key feature of forced exhalation and also at the centre of the movements needed as part of the tennis swing.  As the player runs into position, takes the racket back, inhales (creating energy in the core), then ‘Grunts’ as they swing for the ball releasing the energy in a sudden explosive contraction.   I think these ladies are on to something having watched the pace of their shots at Wimbledon this week!

So the secret is out, it’s all in the ‘Grunt’.  If you want to improve your control and power on the tennis court then work on your breathing technique, get down to the gym and work on strengthening your core and remember that flexibility is important so stretching is a must.  Finally, when the big match is over don’t forget to book a sports massage and include abdominal massage, an area often ignored.  Those tender ribs will be a thing of the past!

This site uses Akismet to reduce spam. Learn how your comment data is processed.